Tribe Cool Crew is a 2014 television anime series produced by Sunrise (later by its subsidiary, BN Pictures). The series follows the energetic Haneru and the shy Kanon as they join three others, Kumo, Mizuki, and Yuzuru, to form the street dance troupe Tribe Cool Crew. The series began airing on TV Asahi in Japan from September 28, 2014 and is being simulcast by Crunchyroll. The series is directed by Masaya Fujimoriand written by Atsuhiro Tomioka, with character design by Yoshiaki Yanagida and music production by avex proworks and a-bee. The opening theme is "Heartbeat" performed by Lol. The series is licensed in North America by Sentai Filmworks.

Welcome to the Tribe Cool Crew wiki! We're always updating and adding more to the articals to bring you the most precise informations about the anime as well as the game. If you're interested in contributing please don't hesitate and write any information you wish to update, we're always welcome new members. 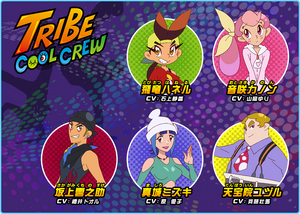 Retrieved from "https://tribecoolcrew.fandom.com/wiki/Tribe_Cool_Crew_Wiki?oldid=6746"
Community content is available under CC-BY-SA unless otherwise noted.