Shishido Yuji (獅子堂 ユージ Shishidō Yūji ) is one of the members of Explosive Machine Guns, later he's in Blossom Bullets

He first appeared in episode 6.

"His speciality is kendama, that's why Yuji always has one around his waist. As the youngest and the most unyielding person of the team Yuji has considerable dance ability whose face lits up whenever he saw a girl but imediately change back to serious when he's performing." -Tribe Cool Crew's official page

Yuji has green hair, spikey at the bottom and one ahoge which seems to be expessive at times. He has red eyes and the underline of his eyes are bold.

He wears his team unform black t-shirt with his team name shorten into "BM" at the left bottom in pink; over his blue hoodie-sleeveless on the left and a light yellow shirt inside. He wears a matching blue wrist band on his left arm; brownish pants with the right leg cut short and blue sneakers. He has a little belt part on the right side of his pants where he put his kendama. He always carry his kendama even on stage performing.

His winter outfit include is his normal dance outfit, white beanie hat and a dark blue jacket, brighter on the sleeves.He is also seen with only his black team uniform and not the blue hoodie or yellow shirt inside.

Yuji is a playful boy with girls, judgy and straight-foward towards others, cold-headed, short-tempered and very ambitious. He often flirts with girls he likes in a very romantic and sometimes ridiculous way, however he seems to not be very serious about it. Mizuki describes him as a "player". He also seems to be proud of himself for being such a wordsmith (even though it's not true). He's well-behaved towards grown-ups nonetheless.

He's nice with girls in general but he tends to tease others alot, this makes his personality clash with Haneru Tobitatsu, especially with his short temper so they fight everytime they see each other, they are most likely rivals. He sees Haneru as a good dancer and a friend in some ways.

His dream and motive for dancing unwrapped at episode 27, when his little brother-Satoshi came looking for him. Satoshi lives with their mother and Yuji lives with their dad, they didn't contact each other much. Yuji promised his brother to become the world's best dancer and then bring Satoshi home; until then he won't contact Satoshi because that's his way of being stubborn.

Appearance in the anime Edit

He tends to hang with Sota alot. Yuji often comes to his house after practice. They are very close friends even though they still fight sometimes. Sota would usually stop him from flirting and fighting if they're together.

He looks up to Riki as the team's leader and the grown-up model of the team.

He called Haneru "froggy" to tease him. They have clashing personalities and is short-tempered which makes them fight whenever they meet. In dance battles, they are rivals so Yuji sees him as a fairly good dancer.

Satoshi is Yuji's little brother. He doesn't contact his brother since they live apart from each other and had a really cold attitude towards him at first but in fact Yuji loves his brother a lot. He wants to become the best dancer in the world, fufil his promise with Satoshi, show him his dance and bring Satoshi home to live with him. He also supports his brothers dream in becoming the best patissiere in the world. Satoshi loves and looks up to Yuji a lot.

He first met Kanon in episode 8 and called her his "Goddess" from the very first sight. He flirts with her whenever he meets her in a rather funny way.

He called Mizuki his "Goddess mk2" and also praises her a lot.

He met Moe in episode 23 and also called her his "godess" until he finds out that she knows Kanon. Then he decided to run away.

Yuji called them his "ultimate godess" after seeing their dance after Dance Road round 4 in episode 24. However when he talks to his teamates, he doesn't seems to be serious about them but pure admiration for the twins's dances. He's also wanted to dance with them more after a dance practise at the twins's house. He seems to change his attitude completely after proposing that they should form a new team and the twins said that depends on them, not the Explosive Machine Guns team.

However, in the end, they manage to form Blossom Bullets from both Explosive Machine Guns and Team Sakura.

Yuji lives with his dad in an apartment, who appears to have a lover/step wife. Both of them seem to care for Yuji but he just doesn't like it.

He always carries around his kendama (that's why Haneru called him cup-and-ball-guy) he's also shown to be skilled at this.

He met Ito Ayumu once but he said that she wasn't his type.

Despite his amazing kendama skills, he failed it once in episode 30, maybe due to his mood.

Yuji and Satoshi in the Bunchaka festival

Yuji in his winter clothes 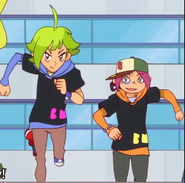 Yuji when he was young
Add a photo to this gallery

Retrieved from "https://tribecoolcrew.fandom.com/wiki/Shishido_Yuji?oldid=6771"
Community content is available under CC-BY-SA unless otherwise noted.