"From the corner of the world, over the darkness, I send you...The moves of the soul!" - Jey El

Jey El (ジェイ・エル) is a world famous dancer whose dance moves bring inspiration to many. Not only that he's good, he's also trying to spread a message of world peace through his dancing and uses his money to save people from wars, illiterate,...

"Jey is the world's top dancer whose moves is extremely beautiful and sharp. His dance is also known as the King of Dance which carried out his message of world peace. He is the image that every dancers yearn to be." -Tribe Cool Crew's official page

Jey El is a tall and dark skinned person. He is skinny and has long, navy blue hair with blue bangs. It is usually tied into a small braid. He has blue eyes and usually wears make up like blue eye shadow and lipstick.

Jey El usually wears his dance outfit- a white sleeveless suit with a lot of belts and a long/short jacket. He also wears green illuminate earrings and necklace.

He is a very wise and calm man who is very considerate for others and the very representative of the world's peace. As a person, he likes to suprise people and is known for being quite a prankster.

He worked very hard to on both dancing and spreading his peaceful message throughout the world by doing many many charity works, even though it's small compare to what the world is suffering, he's trying his best.

Jey grew up in a slum. He had to join a gang in order to survive. but soon he started entertaining his fellow members with his dance. He got recruited into the world of showbiz and worked hard to get where he is today. But the thought of kids living in harsh environment like the one he grew up in never left his mind. That's why he used money to buy an island and made it an orphange for childrens, the island is called Bright Island and it is where the 5th round of Dance Road is hosted, people called it Jey El's santuary.

When he was scouted, he was sad to leave his friends too but he had talents and his friends all came to see him off with a smile.

SPOILER WARNING: THE FOLLOWING DESCRIPTION MIGHT CONTAIN SPOILER. PROCEED AT YOUR OWN RISK.

However, he met an unfortunate accident five years ago and has been in coma ever since. All of the work he has done in the time has been a setup of his assistants, and all the live concerts he performed live ever since has been the work of the Dance Roid- a robot programed with all of his dance moves.

Even with the most cutting edge medical technolody and effort, . He was really trying to put an end to conflict across the globe but there are loads of people out there who don't like that. There are people who have suffered so much, Jey's word couldn't reach them. With his dance and his words, Jey tries to strengthen people's desire for peace and overcome the cycle of hatred.Those people don't approve that and tries to take him out.

He finally regained consiousness in episode 49 thanks to the teams dancing spirit even though deep down in his mind he had already come to. Shocked by the tragic accident that puts him in such a state, he was refusing to wake up. he stood up in the middle of the dance battle between Tribe Cool Crew and Dance Roid to join the flame and in the end encouraged LuiMoe as well as Blossom Bullets to dance toghether with Tribe Cool Crew; finally defeating Dance Roid in the end. That night, when Gallagher offers to clean up the mess after Crowd High and to give Jey all the information he was having, hoping one day Jey can found it good uses and said his last good bye; Jey told him that he's looking forward to share the stage with him again one day.

The next morning, Jey went to see the teams off as Master T gave the teams the last pin for clearing Dance Road, he said that he seems to have injured himself for dancing the day before; after all, he's only human. A while after that, they publicly anounced Jey's condition to the world and stir up a chaos but in the end, everybody was happy for Jey's return.

"I couldn't fight. My dance didn't reverberate in their hearts at all. I couldn't give them any strength.

So i ran. For a long time my minds was stuck in the death of darkness. And i was fine with that" - Jey to everybody episode 50

"From the corner of the world, over the darkness, I send you...The moves of the soul!" - Jey El 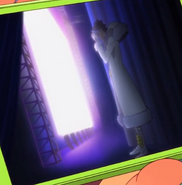 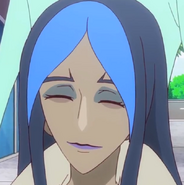 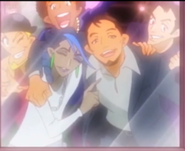 Add a photo to this gallery
Retrieved from "https://tribecoolcrew.fandom.com/wiki/Jey_El?oldid=6827"
Community content is available under CC-BY-SA unless otherwise noted.