SPOILER WARNING: THE FOLLOWING DESCRIPTION MIGHT CONTAIN SPOILER. PROCEED AT YOUR OWN RISK.

Dance Roid is a robot which looks exactly like Jey El and has been programed with all of his dance moves. Ever since Jey's accident 5 years ago, Dance Roid has been the one who performed all the live concerts as well as making public appearances.

Looking exactly like Jey, Dance Roid is a tall and dark skinned . He is skinny with navy bue hair, tied into a lighter colored braid and a hightlight as his bangs. he has blue eyes and usually wears make up like blue eyes shadow and lipstick.

Dance Roid is usually seen in his dance outfit- a blue trimmed white sleeveless suit with a lot of belts and a long/short jacket, fingerless white gloves and black arm band. He also wears green illuminate earrings and necklace.

When he turns rouge, his whole outfit became black: his jacket is yellow trimmed black and dark red in the inside; his hair hightlight, shoulder feathers, belt and gloves became purple; his arm band is dark red with black belts.

He seems to be a part of the Jey El project created by Ms. Mabel to keep Jey's image alive and carry out the mission of being the world's peace symbol. As Master T put it, at this point, Jey's image has taken a life of its own.

He seems to be able to switch colors automaticly.

However, he's under complete control of Gallagher as seen in episode 48 and 49 he has gone rogue and were able to perform Crowd High with maximum ominous aura because he's only a soulless machine. Later in episode 50, after witnessing Jey as well as the teams dancing spirit, he automaticly shut down and return to his normal appearance. 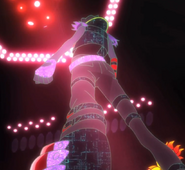 Add a photo to this gallery
Retrieved from "https://tribecoolcrew.fandom.com/wiki/Dance_Roid?oldid=6367"
Community content is available under CC-BY-SA unless otherwise noted.